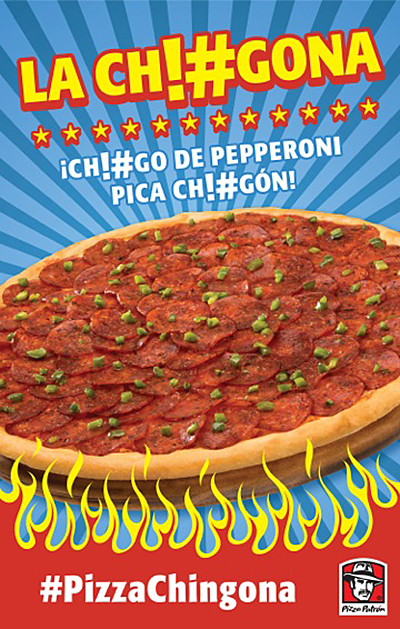 Pizza Patrón’s La Ch!#gona pizza is a spicy pizza topped with jalapeño-infused pepperoni and fresh-diced jalapeños.  Its launch shattered all-time sales records in many stores, making it the most successful LTO product launch in the company’s history.  However, right before the product launch, Hispanic radio stations refused to air the spots uncensored. The campaign then turned to fighting censorship. Pizza Patrón took to social media with a barrage of feisty, yet humorous “Censurado” photos, communicating to its fans that the company was being censored for speaking “Mexican Spanish.”

“The impromptu ‘censurado’ campaign sparked a nationwide debate over whether the word was actually a compliment or a curse word,” said Andrew Gamm, brand director for Pizza Patrón. “It also made our media impressions and sales of the product red hot.”
“La Chingona” is a term that is broadly used in Spanish speaking countries but has different meanings depending on where it is used.  The meaning in Mexico is different from the meaning in Puerto Rico or Brazil for example.  Pizza Patrón and its advertising agency Richards/Lerma received the award jointly for their collaborative work on the campaign, said Gamm.

“The goal of the campaign was to use broadly-used colloquial terminology and ‘picardía’ (street-wise humor) to speak directly to our customer’s heart. And, this one really hit home with our audience,” said Gamm.

AHAA, the Voice of Hispanic Marketing, organizes the annual U.S. Hispanic Idea Awards Conference and represents the best minds and resources dedicated to Hispanic-specialized marketing. Over the last two decades the AHAA has been a long-standing champion for corporate investment in Hispanic marketing. In addition to the awards dinner recognizing innovators in Hispanic marketing, the conference also featured three days of creative insights, breaking research and compelling content with high caliber keynotes by Rupert Murdoch, Robert Rodriguez, Prince Royce.

For more information on the AHAA wards, visit http://www.ushideaawards.com.