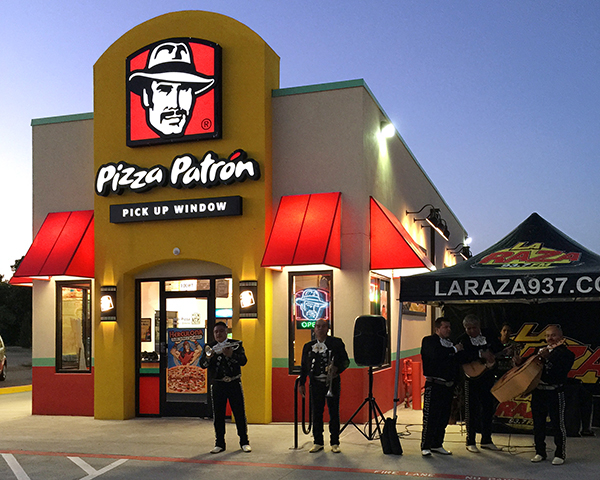 DALLAS — October 7, 2015 – Pizza Patrón, widely known for its PIZZA POR PESOS® program, opened restaurants Austin, Fort Worth and Dallas in September. Each of the new locations was built by a veteran, multi-unit Pizza Patrón owner – one of whom is company founder, Antonio Swad.

Company officials say that after suspending its franchising program for the past two years, it is turning its eye towards growth once again. All of the new stores are strategically located in markets where the brand wants to enlarge its existing footprint.

“The Pizza Patrón brand owns a unique spot in the market and we believe it is more relevant today than it has ever been,” said Andrew Gamm, executive vice president of Pizza Patrón. “Our company has never been healthier and we are ready to mash the growth pedal. We have a solid strategy and a new standalone store model that will help take us to the next level in the industry.”

Pizza Patrón set all-time sales records in 46-percent of its stores during the first three quarters of 2015. In addition, the company’s new standalone store model with pick-up window, which opened on September 18 in Dallas, has already cracked the system’s top five sales list after only its first two weeks of business.

“We are very excited about our new standalone store model and the opportunities it represents for our brand,” said Gamm. “We plan to open franchising again in select markets in the near future.”