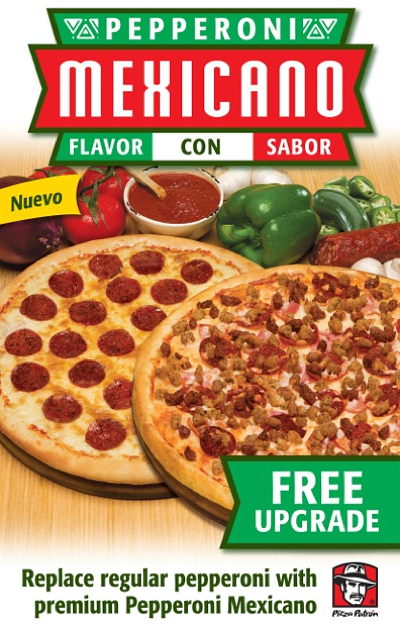 DALLAS  — June 05, 2014 – Pizza Patrón is bringing spice and a touch of Mexico to classic pepperoni this summer with the introduction of Pepperoni Mexicano.  The savory new Pepperoni Mexicano is rich with flavor and is made from beef, pork and a proprietary blend of spices and is infused with a hint of jalapeño.

Developed exclusively for Pizza Patrón by Tyson Foods, Pepperoni Mexicano was created for adventurous Pizza Patrón customers who want to experience an intensified version of the most popular pizza topping of all-time – pepperoni.

“Pepperoni pizzas have always been the number one seller, and our new Pepperoni Mexicano keeps what customers love about traditional pepperoni and cranks the flavor up a few notches,” said Andrew Gamm, brand director for Pizza Patrón.  “We continue to build on our commitment of bringing customers high-quality ingredients and unique, Mexican-inspired tastes for less money than any of our competitors.”
Large Pepperoni Mexicano pies will be featured as “Lista” (translated as now ready) at select locations.
Pepperoni Mexicano is available at participating Pizza Patrón’s for a limited time.  Pricing may vary.