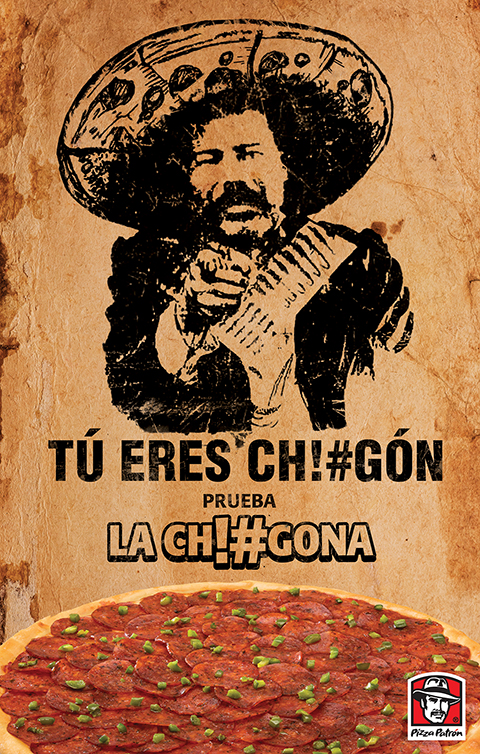 New radio spots banned on some networks, ‘bleeped’ on others

DALLAS  — March 17, 2014 – Despite notification that its new advertising campaign would be banned from a number of major radio networks, and pushback from some franchisees over the name of Pizza Patrón’s new LTO pizza La Ch!#gona, the company has decided to move forward with the concept “as created.”

Pizza Patrón officials offered the following reasoning for their decision:  “We have been here before.  The unique cultural insight inherent in many of our campaigns continues to provoke a deluge of varying opinions.  Our goal is simple – to connect with and serve our customers better.

The Spanish language ads focus on the term ‘chingón,’ asking customers if they have what it takes to try the company’s spicy new LTO pizza named La Ch!#gona.  The product is a large pizza with approximately 90 slices of proprietary jalapeño stuffed pepperonis and topped-off with fresh, diced jalapeños.

“No one will run our ads as recorded, even the networks willing to air the spots are ‘bleeping’ us,” said Andrew Gamm, brand director for Pizza Patrón.  “When the Real Academia Española, the world’s foremost authority on the Spanish language, defines ‘chingón’ as a very positive characteristic, it makes us feel confident in our position and in our decision to move forward without apology.”

According to Real Academia Española, the official royal institution responsible for overseeing the Spanish language, the definition of the word ‘chingón’ is defined as follows:  chingón, na.  1. adj. street slang. Méx.  “Said of a person who is competent in an activity or knowledgeable in a specific area.”

Aldo Quevedo, Hispanic marketing expert and principal/creative director for Richards/Lerma says, “In Mexico, people make fun of everything: pop culture, international events and even catastrophes.  We are used to it and nobody really gets offended.  We have thicker skin and there’s a reason for that.  That’s why it’s more shocking to me that the name is being censored here in the US.  I understand that the name of the product could be controversial. But really, after you try it you will understand that it’s the best descriptor.  To me, it’s the only name that fits: La Ch!#gona.”

Available for a limited time only, the La Ch!#gona pizza has a recommended price of $7.99.  Prices and availability may vary by market.