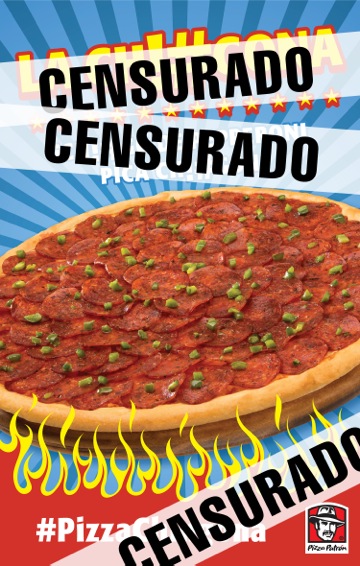 New ads too ‘chingón’ for many Spanish radio networks

DALLAS  — March 10th, 2014 – Pizza Patrón, the Dallas-based pizza chain, was informed that the company’s new advertising campaign would not be permitted to air on a number of major radio networks.  The decision came just weeks ahead of the radio spots planned premiere on Monday, March 31st.

The Spanish language ads feature different personalities who expound why they are ‘chingón’ enough to try the company’s spicy new LTO pizza named La Ch!#gona.  Richards/Lerma, the Dallas-based Hispanic branding and creative agency, was hired by Pizza Patrón and charged with the task of creating spots that speak ‘Mexican’ to the brand’s core, Mexican-born customer base.

Aldo Quevedo, principal and creative director for Richards/Lerma defended the strategy behind the ads saying, “Mexican slang and humor are very particular, and we applaud Pizza Patrón for connecting with their core consumers at a very deep level, avoiding stereotypes. The brand speaks the same way they do, I mean, WE do!”

“The decision to ban the spots over the name La Ch!#gona doesn’t make much sense to us,” stated Andrew Gamm, brand director for Pizza Patrón.  “We are being selectively censored to protect the Mexican listeners from so-called potentially ‘offensive’ language.  These same networks regularly feature songs and talk-show dialogue that is much more risqué than anything we are doing.”

According to Real Academia Española, the official royal institution responsible for overseeing the Spanish language, the definition of the word ‘chingón’ is defined as follows:  chingón, na.  1. adj. street slang. Méx.  “Said of a person who is competent in an activity or knowledgeable in a specific area.”

Edgar Padilla, marketing manager for Pizza Patrón and the creative mind behind the La Ch!#gona campaign said “colloquialism,” “picardía” (street-wise humor) and “censorship” are common traits in Mexican culture. “These same characteristics are essential to the foundation of our campaign whose objective is to speak directly to our customer’s heart.  We understand and know who we are targeting and make no excuses – Pizza Patrón is a brand for La Raza (the people).”

The product, La Ch!#gona, is a large pizza with approximately 90 slices of proprietary jalapeño stuffed pepperonis topped with fresh, diced jalapeños.  Available for a limited time only, the pizza has a recommended price of $7.99.  Prices and availability may vary by market.