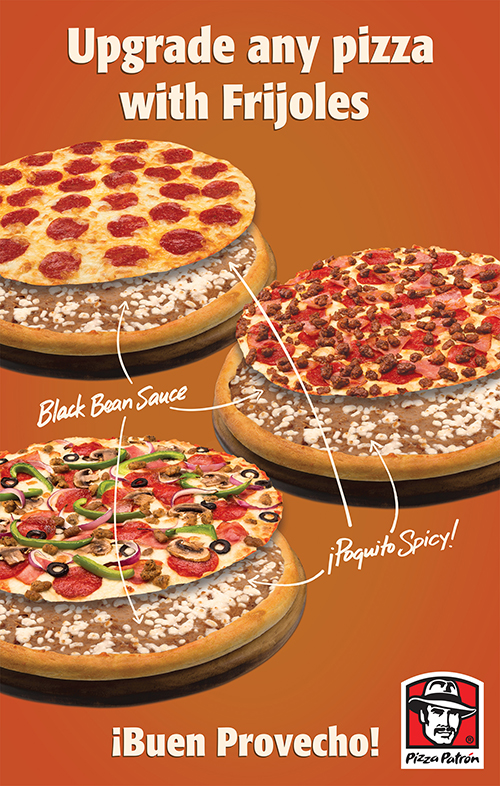 DALLAS — November 18, 2015 – Black bean sauce is spreading quickly at Pizza Patrón this holiday season – a perfect complement to your favorite pizza. The new ‘poquito spicy’ black bean sauce is available at all locations through the end of the year and can be enjoyed as the base for any of the brand’s ‘Favorita’ specialty pies or with any custom-topped pizzas.

The company launched its limited time offer Frijolera™ (bean lovers) pizza recipe on Mexican Independence Day in September and soon received customer requests to try the sauce with other toppings. All requests were accommodated for only $1 extra and now each store will be featuring new POP displays promoting the sauce with the brand’s other recipes.

“The delicious Frijolera™ pizza featuring our proprietary ‘poquito spicy’ black bean sauce can only be found at Pizza Patrón,” said Andrew Gamm, executive vice president of Pizza Patrón. “For the rest of the year, we hope to inspire more customers to try our black bean sauce on their favorite pizza as well.”

Through the end of the year, customers may substitute the premium Frijolera ‘poquito spicy’ black bean sauce on any of their favorite pizzas such as the popular La Mexicana pizza for only $1 more.