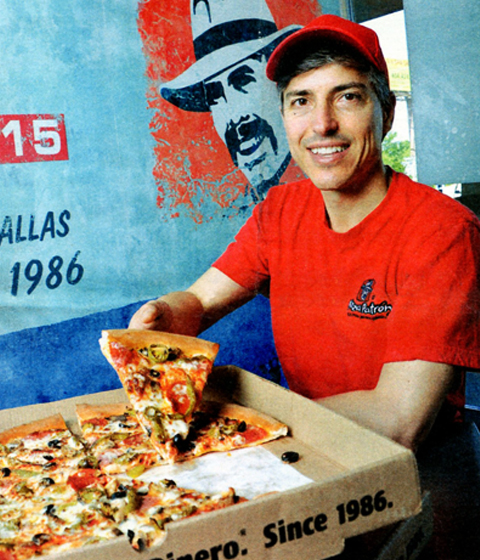 ATLANTA — May 7, 2010 — Pizza Patrón’s new franchisee Armando del Bosque is photographed for a story in the May 7th edition of the Atlanta Business Chronicle newspaper, which caters to the business community in Atlanta. He is dressed in full Pizza Patrón regalia as he holds up a slice of a Patrona pizza.

The story features pizza chains that have entered the Atlanta metroplex in recent months and how each one is different from the rest. Pizza Patrón, which opened the first store on April 20th in Doraville, plans to open many more this year the story goes on to say. Pizza chains like Pizza Patrón focus on segmented markets and want to be part of the local community. The story also explains how many consumers in this down economy are turning to cheaper meals for their families and pizza is fairly inexpensive to make. “The Latino population will continue growing and that will allow us to keep growing,” Pizza Patrón president Guillermo Estrada said. ” We get to a point where we have a lot of stores in Dallas or Houston, but the Latino population keeps growing, so we keep growing. The nation’s [largest] minority is growing and we are at the forefront of this shift.”

For the complete story go to: http://atlanta.bizjournals.com/atlanta/stories/2010/05/10/story6.html

Pizza Patrón, America’s #1 Latin pizza brand, offers traditional pizza, wings and sides in its community based, Latin-influenced stores. Pizza Patrón was founded by restaurateur Antonio Swad in 1986, in Dallas, Texas, and today operates 99 dine-in and carry-out restaurants in seven states with 40 more under development. Pizza Patrón has franchise opportunities available in prime markets throughout the country offering a proven system for hard-working franchisee candidates. In 2007, the brand received international news coverage when it decided to accept Mexican Pesos at all of its locations, gaining over 500,000,000 media impressions worth over $30 million in the U.S. alone. The company’s medium AMIGO PIZZAS® start as low as $4 and X-Large LISTA-NOW READY™ pepperoni pizzas start as low as $6 all day, every day.