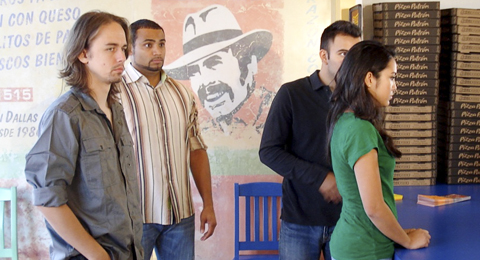 DALLAS — January 05, 2011 – Hispanic population growth is expected in the 2010 census results. For Pizza Patrón, the leading Latin pizza brand, this is no surprise. The company, which studies the U.S. Hispanic demographic meticulously, believes the real story is not in the numbers but in the cultural-shift taking place within the Hispanic demographic.  The new Latino population in the U.S. is growing up bilingual and bicultural, and that is the driving force behind Pizza Patrón’s new, long-term brand strategy.

According to Iconoculture and the U.S. Census, for every nine births among Hispanics, there is only one death, compared to a roughly one-to-one ratio among whites.  By 2015, one-third of the nation’s population, 19 years old and younger, will be Latino.  Pizza Patrón is in the process of updating every aspect of its business, from training and operations to menu systems and advertising, with the new, younger bicultural Hispanic in mind.

“It’s not enough for us to just provide friendly, bilingual service anymore,” said Andrew Gamm, brand director for Pizza Patrón. “Our future hinges on our ability to create a unique, bicultural experience for our guests.  The newest and fastest-growing segment within the Latino population is very multi-dimensional, very young, and will influence American culture significantly in the future.”

Pizza Patrón, celebrating its 25th anniversary in 2011, has witnessed these changing dynamics first-hand in its stores over the past few years.  Keeping pace with this emerging cultural shift in the Hispanic market is actually helping us reach more mainstream consumers too, which is great for our brand, says Gamm.

“For instance, our latest TV commercials feature a younger, more diverse group of customers,” said Gamm. “And, we are putting more dollars into general market programming than ever before – that marks a considerable change for us compared to what we have done historically even though our Hispanic brand focus hasn’t changed at all.”

Recently highlighted in the Wall Street Journal for its strategic shifts focusing on the Latino demographic, Pizza Patrón continues to be a lightning rod for discussion regarding Hispanics in the U.S. The company plans to continue to shape the brand to reflect the contemporary Latin experience in the U.S. today.