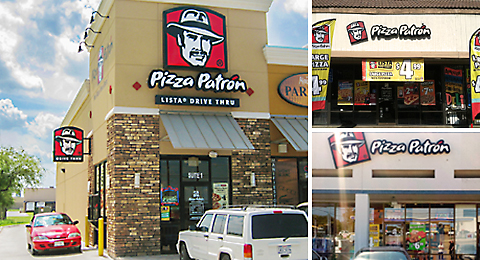 A worker at the Pizza Patrón on busy Buckner Boulevard retrieves two ready-to-go pizzas from a warming oven, hands them to a hungry diner and calls out “lista,” the Spanish word for ready.

It’s a signal to the cook that more no-wait pizzas are needed.

It’s also the state in which the chain’s founder, Antonio Swad, finds himself.

Now, Swad says he’s ready to move into the chain’s next phase. It’s planning to open company-owned locations for the first time.

“The reasons that we made the decisions we made are solid,” said Swad, who leads a Latin-themed business but speaks only poquito Spanish. “We’re a company that’s really on the move.”

Founded in 1986 in Pleasant Grove, Pizza Patrón is not subtle about courting its core customer. The motto is in Spanish: “Más Pizza. Menos Dinero” (More Pizza. Less Money).

The Dallas-based chain, which now has 89 locations, mostly in Texas, sparked a firestorm of controversy in 2007 when it allowed customers to pay with Mexican pesos.

Swad followed that gambit in 2012 with a “pizza por favor” promotion that gave free pizzas to anyone who ordered in Spanish.

As hundreds lined up for free food, Internet posters lobbed angry comments that inevitably led to a debate about immigration.

Pizza Patrón’s radio ads are solely focused on the Mexican-American audience. They are laced with Mexican alburear, or humor, said Andrew Gamm, the chain’s brand director.

And two-thirds of the franchisees — entrepreneurs who use their own funds — are Latino. Swad is not.

Over the past 10 years, the company grew from four locations, all owned by Swad, to more than 100. Of the 89 remaining locations, 79 are franchised and 10 are owned by Swad. About 35 are in Dallas-Fort Worth.

Like the rest of the restaurant industry, Pizza Patrón owes its girth to franchising.

Among fast-food restaurants, which generally includes the pizza category, 13 percent of restaurants are company-owned, 46 percent are owned by franchisees, and the remaining 41 percent are independents, according to National Restaurant Association.

For the restaurant industry as a whole, franchising remains a popular growth model. It allows a brand to dramatically increase the number of locations without having to pay for their construction or upkeep.

The International Franchise Association, a trade group, estimates that there will be 155,571 franchised fast food restaurants and 36,981 franchised full-service, sit-down restaurants operating in the U.S. this year. That makes restaurants the largest category in franchising.

Among franchised outlets, business services (such as tax preparation), commercial and residential services (including cleaning), and quick service restaurants are expected to see the strongest employment gains in 2014, according to a forecast released this week by the franchise association.

“In most cases, it goes the other way, where a local or regional chain of corporately owned restaurants will decide to embark on franchising for a more rapid development of their brand and to gain more market share.”

But Swad, who also is chairman of Pizza Patrón and took over last year as president, wanted change.

“I noticed … that we were spending time on relatively unimportant things, attempting to build consensus among our franchisees on minor decisions, instead of putting our time and energy on developing a strategy to move the company forward,” he said as transactions took place in Spanish at the counter a few feet away.

For example, he said, it took months to get the franchisees behind the “pizza por favor” promotion, in part over unhappiness that they would bear the cost.

“We spent time and energy on this ‘get on board’ process instead of the ‘let’s move forward’ process,” Swad said.

So last year, at least five franchisees left the system. Swad said it was “by design.”

What does “by design” mean?

“Without going into excruciating details: Franchisees have an obligation to maintain the brand to a standard; they need to operate their restaurants to a standard that was difficult for some. We’re committed at Pizza Patrón to raising our standards of operation higher than they’ve ever been.

“Sometimes when you raise the standard, not everybody is able to keep up,” he said.

More franchisees left before last year. In 2008 there were 50. Now there are 32, and some probably won’t be around next year, Swad said. No more will be added for the foreseeable future.

The company closed out entire markets: El Paso (all six stores), Las Vegas (all six), Fresno (all three) and San Diego (both stores). All Dallas-Fort Worth stores remained open.

Pete Tucker, a restaurant industry veteran, closed the two San Diego stores because keeping them open “just didn’t make any sense” financially. Without the name recognition the brand has in Texas, and with the California pizza market already saturated, Tucker said he lost money on his two stores.

“We just could not make the business work in San Diego,” he said. “We don’t hold any bad will to Pizza Patrón.”

Another former franchisee asked that his name not be used because he may file a lawsuit. The company is not currently facing litigation, Swad said.

The second former franchisee agreed with Tucker that locations outside of Texas had a hard time generating enough sales to break even. Not counting Swad’s stores, many of the other locations were losing money, he said, and his loss was in the seven figures.

Gamm said even with the store closures, the company posted record sales in 2013 of $39.4 million.

He said he has not heard of any filing for bankruptcy.

“We do have some terrific franchisees in this system that we’re happy to grow with,” said Swad, who also founded the Wingstop chicken wing chain.

With last year’s store closures behind him, Swad is planning for growth.

In 2013, seven locations opened — all franchised.

This year, 25 are expected to open: 15 corporate locations and 10 franchises, with 20 of those locations in Dallas-Fort Worth. The average cost for a strip mall location is $250,000. Money for the corporate locations will come from corporate coffers. Swad said he has not taken on any new investors.

“It’s a lot [to take on] in one sense. In another sense we’re speaking to our core competency,” said Swad, ducking into the kitchen to check on an order. “It’s an exciting challenge to have.

“We’re really amped up around here. We have a big year ahead of us.”